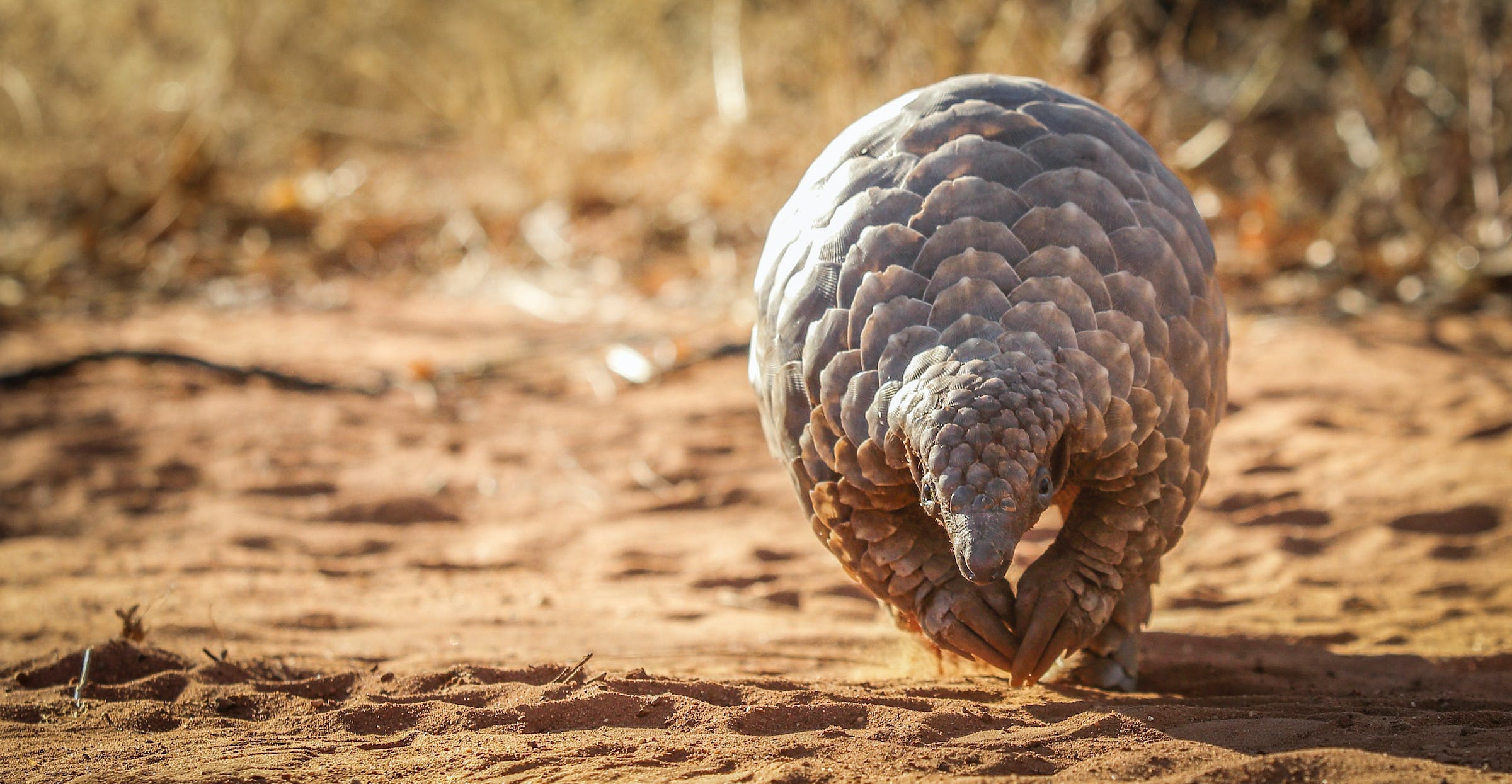 How Community-Based Conservation Benefits All Species

Everywhere the Small Wild Cat Conservation Foundation (SWCCF) works, we employ the principles of community-based conservation. Community-based conservation begins by helping people solve their problems and consequently helps small cats and other species. For example, a repaired or new hen house protects against a family’s losses and hence makes retaliatory killing of all small cats & other predators unnecessary. Six species of small cats occur in Rio Grande do Sul, Brazil, so fixing one hen house saves all six small cat species, not to mention other species that feast on chickens. By improving people’s lives we win their hearts and minds and get them on our side—the side of conservation. Our efforts are magnified by every community member. But what do African golden cats and fishing cats have to do with pangolins?

Here’s what you need to know that most people, even those in conservation, don’t know. While there are currently 40 species of wild cats in the family Felidae, there are only eight species of pangolins in family Manidae. Africa and South Asia each have four species of pangolins. All Asian pangolins are in a single genus, Manis. Two genera in Africa, Phataginus and Smutsia, each have two species. Tragically, all eight pangolin species are in serious decline, the victims of an insatiable global wildlife trade. All are threatened with extinction. You can see where I am going!

Conservation requires continued presence and commitment. SWCCF’s many working groups and partners maintain an active presence and long-term commitment, launching new, creative programs that benefit communities. We are already there making a difference.

Below are few examples from some of SWCCF’s partners about how they have saved pangolins.

On May 12, 2022, two colleagues and I found two pangolins hanging amongst many dead carcasses at a roadside market in a remote area of the city of Yaoundé, awaiting a buyer. The two pangolins were still alive but heavily stressed by the curious gaze of onlookers and the hum of cars mixed with the loud sound of horns. We were visiting bushmeat outlets in Yaoundé for almost three weeks, conducting a One Health surveillance program with the aim of investigating pathogens with zoonotic or epizootic potential present in the wildlife sold at local bushmeat markets. Seeking to evaluate potential infectious disease threats with relevance for wildlife conservation and for public health, we asked sellers the origin of animals sold in bushmeat markets, and if animals were transported alive to the markets. This was made feasible through a market contact with whom I had undertaken similar investigations before.

Trust is an essential part of an investigation. You can’t walk into a bushmeat market with a data sheet or a camera. Whatever your reason for approaching the sellers, you’ll face hatred and possible violence. I knew this only too well and avoided unnecessary risks. These bushmeat markets are routinely raided by wildlife officers who confiscate any protected species they find. Pangolins are fully protected species under Cameroonian wildlife legislation and the hunting, trading, or handling of a pangolin is forbidden and punished by the law. However, a major challenge with wildlife conservation in Cameroon is that fully protected species like pangolins are nevertheless openly sold in some markets and on the menu in bushmeat restaurants.

On this sunny afternoon, the three of us were heading to a small neighborhood where wild animals are sold. This point of sale is located on the outskirts of the city in a relatively unpopulated area, crossed by a main road that joins the travel axis between Yaoundé and Douala, the two most developed cities in the country. Just at the edge of the pavement, you can see men and women engaged in small-scale commercial activities such as the sale of fruit, wood planks for construction, and a most remarkable singular point of sale of bushmeat. The animals are hung by the leg from a rope attached to an oblique post near the road, obviously to attract more people. Two live pangolins were visible among a selection of carcasses (rodents and small carnivores) for sale along the roadside. One pangolin was a juvenile and the other was an adult female.

I was immediately struck by the sad and frightened look in this little pangolin’s eyes as he challenged me to do something for him. We were able to arrange an exchange with the pangolin vendor so that we could safely rescue the two individuals. The vendor told us that for two cases of beer (about $42), he would trade the two pangolins. So these two pangolins, whose fate would have been a boiling pot in one of the many households in Yaoundé, were saved. The pangolins were subsequently handed over to the Tikki Hywood Foundation Pangolin Rescue Center at Mefou with staff trained in the rehabilitation and release of pangolins into their natural habitat.

Badru Mugerwa writes: “Franklin is passionate about wildlife protection. With a grant from SWCCF, Franklin recently founded the Cameroon Wildlife Conservation Initiative (CWCI), an organization committed to reducing local people’s dependence on bushmeat consumption. Local people often do not have as many alternatives for their protein supply. Additionally, the challenging economic situation coupled with the lack of income generating activities often paves the way to pervasive wildlife harvesting both for food and generating incomes. CWCI is engaged with local communities in Cameroon to reduce the exploitation of wildlife, and make sure that people don’t enter the forest to capture species, but rather find solutions outside of the forest. We use mobile dental units to provide free dental care and treatment to local people living around protected areas. We are also planning to engage and empower local people through pig farming to increase household income and also create a local cooperative that will help local families diversify their household income through borrowing and saving. In return, local people provide voluntary community policing against poaching.

CWCI’s main focus is the protection of the African golden cat and pangolin species. Our threat reduction projects benefit all other species as well. CWCI’s creation has provided great opportunities for pangolin rescue. A collaboration with Tikki Hywood Foundation working within the same framework will have a greater positive impact on the conservation of these protected but highly threatened species. Similar projects take place in all 20 African countries where the African Golden Cat Working Group is active.”

I work in the western Terai region of lowland Nepal, where fishing cats and pangolins share habitats.  During my activities, I found that pangolins are poached and traded illegally for their scales that are used for ornamental purposes and in traditional Chinese medicine. As a wildlife ranger, I have arrested and seized large numbers of scales and also some live pangolins, mostly along the Nepal-India border. Due to the open border between Nepal and India, it is difficult for law enforcement to control poaching and the illegal trade of live pangolins and their scales.

It’s mostly uneducated and poor people who are involved in pangolin poaching. To fulfill their daily needs and obtain extra income, people poach and sell pangolins to illegal wildlife traders. Therefore, I realized that patrols and punishment cannot stop poaching. We must educate locals and support alternative livelihoods for income so that we can change their behavior. Behavioral change is the key to converting hunters into conservationists, and this is only possible by supporting them, not by arresting them.

Considering these facts, I work with underprivileged communities who engage in hunting and poaching. I have regularly scheduled school outreach and community-radio programs in the local languages, and support these communities to solve their problems and increase their incomes. For example, these communities mostly raise chickens, but fishing cats and other predators prey on their chickens because they live in poorly-made chicken houses. When the chickens are killed, people lose their limited household income. Such losses force them to engage in hunting and poaching activities to compensate their loss. So to convert them from hunters to conservationists, I repair old chicken houses and build new predator-proof ones. Safe chicken houses prevent the retaliatory killing of fishing cats and eliminate the need for people to poach, thus benefiting pangolins and all wildlife as well.

My job is very satisfying to me and I take great pleasure in improving people’s daily lives. These people become part of my team and multiply my conservation efforts to save fishing cats and pangolins.

The Chinese pangolin is Critically Endangered and is in drastic decline throughout its range because of over-harvesting to supply the Chinese traditional medicine market and the loss of forest habitat. Although fully protected by the Nepalese government, there is no national funding for enforcement of anti-poaching actions and trade restrictions. The team at Women for Conservation is working to scale up threat reduction actions for pangolins. We work with local youth, rural communities, and women’s group to help them become guardians of pangolins and their forest habitat.