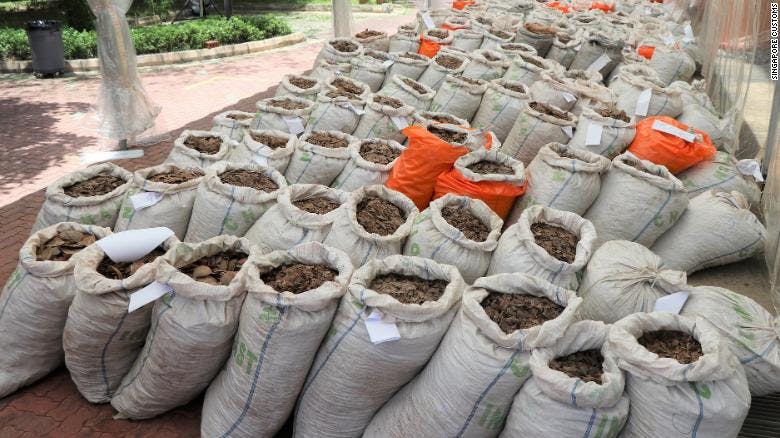 (CNN)The second major seizure of pangolin scales in Singapore in under a week has highlighted the plight of one of the world's most trafficked animals, a shy and secretive beast whose meat, blood and scales are highly sought after in parts of Asia.

On Monday the Singapore Customs and Immigration and Checkpoints Authority seized 12.7 tonnes of pangolin scales packed into 474 bags in a container en route to Vietnam from Nigeria. It was marked as holding "cassia seeds," according to the agency.

"The pangolin scales that were seized came from two species and are equivalent to around 21,000 pangolins," a press release says. The haul was worth about US$38.1 million, the Singaporean agency estimates.

It was the second interception of smuggled pangolin scales in five days, with the two seizures totaling a record 25.6 tonnes. The earlier haul, which also originated in Nigeria, also contained 180 kilograms (around 400 lbs) of elephant ivory which had been cut up and carved.