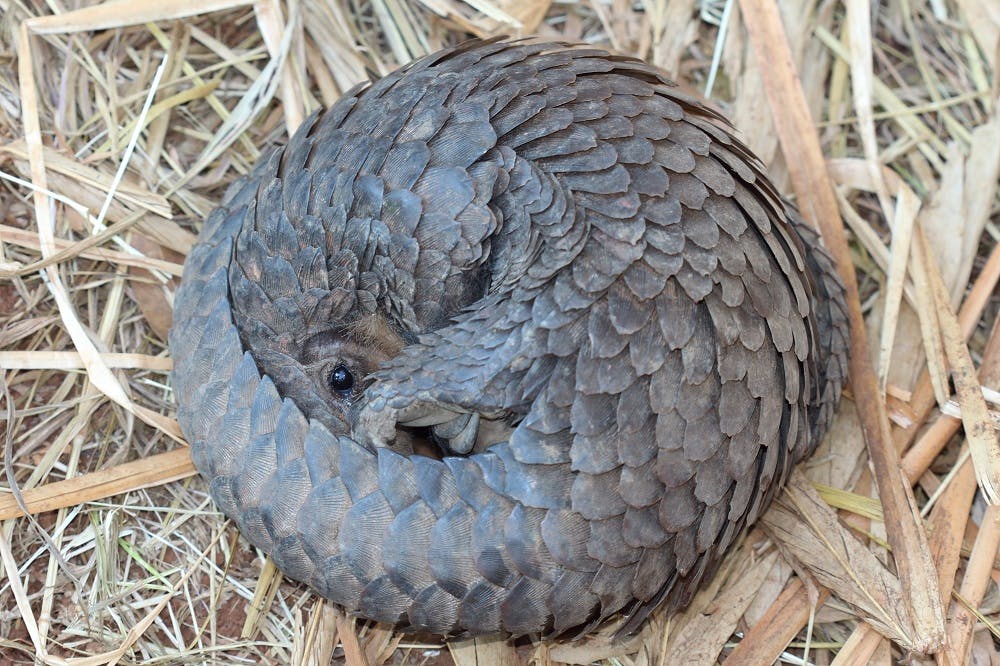 What is a pangolin?
Pangolins are mammals uniquely covered in tough, overlapping scales. They eat ants and termites using an extraordinarily long, sticky tongue, and are able to quickly roll themselves up into a tight ball when they feel threatened. Eight different pangolin species can be found across Asia and Africa. Poaching for illegal wildlife trade and habitat loss have made these incredible creatures one of the most threatened groups of mammals in the world.

Physical Characteristics
Pangolin species vary in size from about 3.5 lbs. to a maximum of about 73 lbs. They vary in color from light to yellowish brown through olive to dark brown. The protective, overlapping scales that cover most of their bodies are made from keratin—the same protein that forms human hair and fingernails. Overlapping like artichoke leaves, the scales grow throughout the life of a pangolin just like hair. Pangolin undersides do not have scales, and are covered with sparse fur.

Behavior
These solitary mammals are mostly nocturnal and highly secretive, thus it is difficult to study them in the wild and many mysteries remain about their behavior and habits. Some pangolin species such as the Chinese pangolin sleep in underground burrows during the day, and others including white-bellied and Sunda pangolins are known to sleep in trees.

Pangolin scales provide good defense against predators. When threatened, pangolins can quickly curl into a ball, protecting their defenseless undersides. They also deter predators by hissing and puffing, and lashing their sharp edged tails. Pangolins, dependent on their strong sense of smell, identify their territories by scent marking with urine and secretions from a special gland, and by scattering feces.

Diet
Pangolins live predominantly on a diet of ants and termites, which they may supplement with various other invertebrates including bee larvae, flies, worms, and crickets.

Reproduction and Lifespan
In most pangolin species, males are 10-50 percent heavier than females. Pangolins reach sexual maturity at two years, and most pangolins give birth to a single offspring, though two and three young have been reported in the Asian species. Pangolin mothers nurture their young in nesting burrows. Infant pangolins will ride on the base of the mother’s tail as she forages for insects.

It is unknown how long pangolins can live in the wild, though pangolins have reportedly lived as long as twenty years in captivity.